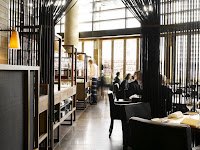 This week we're putting a different slant on our review, thanks to a budding foodie friend of ours James, 10, from Northcote.

Even though James is still at primary school, his taste buds have clearly been fast-tracked because this guy would rather dine on lobster risotto than Maccas. Don't worry, he's not a freak of nature, just a talented youngster who has developed a taste for good food and has a lot to say about the scourge of kiddie menus.
So this week James penned some thoughts for us and we reckon they made such an interesting read we thought we'd share them with you all.

Regular kate and zoe reviews will be back next week but from now on a guest blog pop up from time to time. Stay tuned...

"My love of good food started in Perth at a restaurant called Sorrento. It was there where I had a lobster risotto - my choice, not my parents' - that would change my eating habits forever. The lobster risotto was delicious. The lobster was nice and soft and easy to eat.
I used to be eating this really general stuff off the kids' menu such as chicken nuggets and deep-fried rubbish. Kids' menus should be banned. They should think of something else for kids like stuff off the main menu but a bit plainer and in smaller serves.
Before my experience at Sorrento I sometimes ate at fast-food outlets. Now I realise how bad it was. I remember having a conversation with my friend and as a joke we were plotting to blow up all the fast-food places.
After my experience at Sorrento I have come to like restaurants like Otsumami, Tandoori Oven in Adelaide, Everest, Bhoj, Key on the Wall, Seagrass, Pure South, Robbie Burns, Red Emperor, East Emperor, David’s, Tutto Bene, The Royal Mail Hotel at Dunkeld, The Kookaburra in Halls Gap, Pireaus Blues and, for my tenth birthday, Rockpool.
When I walked into Rockpool I knew it was something special. The waiters knew I wanted steak and they even knew it was my birthday. For the entree we had duck ragu, calamari and king prawn tortellini. Our favourite was the duck ragu. For the main I had a fillet steak. 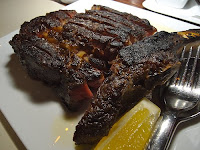 It was one of, if not the best, steak in my life. We also had potato puree - it was delicious.
Then came the real surprise: the waiter came out with a cupcake with a candle on top. It was the best cupcake ever. When we left I was given the menu. It was the best restaurant I had ever been to.
My favourite cuisines are Indian, Italian, Modern Australian and Chinese. I like Indian because of the taste and the different flavours; I do not like curries too hot, not yet at least.
I have liked Italian all my life because of pasta, garlic prawns and garlic bread. I like Modern Australian because of steaks, lamb chops and sausages. I like Chinese because of pork buns, but I like all Chinese a lot.
If one of my friends invited me to a birthday party at McDonald's, KFC, Hungry Jack's or Red Rooster, I would not say no, I would say yes.
But I would not eat a thing from that rubbish deep-fried oven. Ever since Sorrento I have tried to avoid touching anything from the deep-fried oven.
I hope more kids eat what I eat one day."
- James, 10, of Northcote
Posted by kate and zoe at 4:30 pm

Love your work James! Although I must say I'm jealous - I'm 28 and haven't eaten at Rockpool yet and my prospects aren't looking great for my next birthday celebration either - but I still think I can do better than Maccas! Looking forward to your next review!

Thanks Sally I hope you do get to Rockpool it really is nice.
James

Hi James,
You sure know your food! My kids are not much younger than you and they still love McDonald's. If we go to an Asian restaurant Rebecca will only eat fried rice. Do you have any tips to make them a bit more adventurous?
Keep up the good work,
Cheryl.

Hi Cheryl
here are som tips to get your kids to eat some new things
1. take them to a place that has foods that are a bit unusual
2. introduce them to new cuisines
3. ask them if they want to try a bit of your food.
James

Thanks James.
They do try to eat off my plate when I'm eating dessert :-).
I will try your tips and fingers crossed they'll order something other than fish and chips next time we go out.
Jess and Ben do like stirfries, so that is something.
Cheryl.