Getting caught up in the Cumulus hype, that’s easy. Getting a table, now that’s another matter entirely.

Since Andrew McConnell opened his latest venture in Flinders Lane only a few months ago, crowds have been flocking. For breakfast, lunch, dinner and late-night snacks, Cumulus Inc is pressing the right buttons. But thanks to the no-bookings policy, you’ve got to be snappy – or incredibly lucky – to get a table or a seat at the bar.

Given that, kate and zoe decided to go against everything our bodies were telling us and get up early for a pre-work breakfast. And yes, it was worth it.

Cumulus has one of those menus that make you wish you could eat three meals in the one sitting because it’s just so hard to pick just one. I’m normally a bacon and eggs gal for breakfast but at Cumulus there’s just too many tempting options to stick with the norm.

But in the end the Turkish baked eggs, spiced tomato, dukkah and labne ($14) won out and it was the right choice. 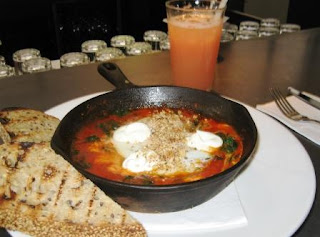 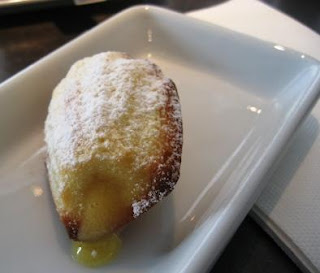 Bircher muesli ($8) at Cumulus is top notch. With grated granny smith apple and almonds, it is the perfect consistency - deliciously moist and refreshing, without a hint of dryness. It's just a shame that the serve is not bigger, it's so good. 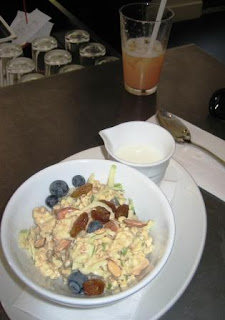 I had lunch there on grand final day - food was great, the staff were organised and the meal wasn't rushed. Great the see the owner in the kitchen as well.

It was a great way to grab a bite to eat before walking over through the gardens to the game. As you say very Melbourne!