Hi guys,
As you may have noticed, kate and zoe have both been a bit lazy of late. Thankfully, our junior blogger mate James has been anything but. In fact, this food-loving 10-year-old has been dining at Rick Stein's establishment in the UK. Read on with envy...

Mum and Dad like watching Rick Stein's cooking programs on television, so we went to his restaurant when we travelled to England.

The Seafood Restaurant is in Padstow, Cornwall, and a really good thing about it is the kids' menu.

There is no pizza, deep-fried chicken nuggets or burgers, but grilled cod with vegetables, sirloin steak with thin-cut chips, and goujons of plaice (a local fish which is very nice).

But I was keen to share some of the courses off the main menu with Mum and Dad, so we did.

Ever since the Seafood Restaurant opened about 30 years ago, Padstow has become known as Padstein, because Rick Stein has opened up heaps of other food stores and restaurants in the town.

We booked our table on the internet months before we got to England. And we arrived in Padstow on a Monday night in October. 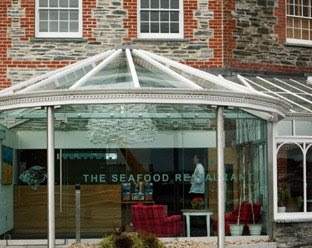 Before going to the main table we were given drinks and some plaice at the bar. We had never had plaice before. It was brilliant and a great start for the Seafood Restaurant.

When we were invited to our main table, we were given warm homemade bread, white and wholegrain.

For the entrees we shared marinated tuna with passionfruit and lime. The passionfruit went surprisingly well with the tuna.

Another entree was lobster risotto with lemon oil. This was the best! The lobster was well cooked and went very well with the arboreo rice.

It's hard to believe, but the main courses were as good as the entrees.

We shared three mains, starting with the monkfish vindaloo. The sauce was very good and it had just the right amount of vinegar in it, but wasn't too hot.

We also had Padstow lobster _ it was very nice _ . and a chargrilled fillet of sea bass with a tomato, butter and vanilla vinaigrette. It was my favourite main and it was amazingly well cooked.

For dessert I had some fruit sorbets. The flavours were vanilla-lemon, blackcurrant, strawberry and mango. They were all good for different reasons.

Overall, the Seafood Restaurant had great food, great service and, for once, a really good kids' menu!

What a great review,look out Zoe he will have your job soon.

I agree, James is a legend. And I've no doubt my job is in jeopardy.