A Day of Food in Philadelphia

Perhaps we should rename this site to 'kate and zoe and the kid' because once again, our junior blogger mate James has come through with the goods. This time is a review of two Philadelphia restaurants he visited on a recent holiday to the UK and the US. 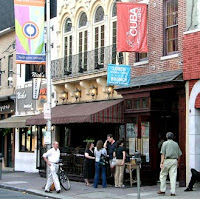 I ate a lot of rubbish during my holiday to America, so it was hard to believe that it could suddenly get better in one state. But that's what happened and for me, the state the food got better in was Pennsylvania. The largest city, Philadelphia, gave us some great food on our first day of exploring the old part of town and the fairly dull new parts, especially after we had spent six days avoiding all the junk food in Orlando, Florida (the theme parks were great fun though).

The first restaurant I went to in Philadelphia was a Cuban chain of restaurants called Cuba Libre at 10 S 2nd St (we didn’t realise they had one in Orlando, wish we had). This restaurant is perfect for breakfast, brunch and lunch.

First we were given some delicious fresh-out-of-the-oven bread with deliciously sweet mango butter. The bread was warm and perfect to eat - it tasted wonderful. The mango butter was nice sweet and perfect with the bread.

The second main my dad had was shredded barbecue rib steak burger with slaw and shredded potato fries with salsa. It was delicious but it was too sloppy to eat with hands so Dad had to eat it with a knife and fork. 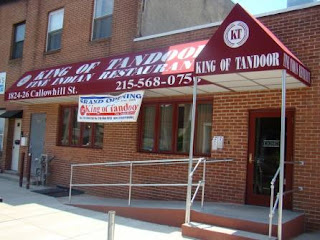 First we were served some complimentary pappadam with dips. The pappadam was nice and crunchy and with some delicious dips it would make anybody happy.

For the main I had butter chicken and garlic naan with rice. The butter chicken sauce was delicious and the meat was portioned to mouth size pieces making it a very easy to eat. The naan was soft and garlicky, it was very nice. The rice was nice too.


The second main which Dad had was chicken vindaloo with garlic naan and rice. It wasn’t too hot but it was tasty with nice chicken. Dad agreed the naan was nice and fluffy, but he kept dipping it into my butter chicken sauce.

The service of this restaurant was very good. The waiter was more than happy to explain the different options on the menu to those who were not sure, mostly local people who have never anything spicy.

I felt that this blog is such a nice information. Happy to read this blog. Thank you so much for giving wonderful blog like this..
Ramanathapuram Hospital List
Hospitals in Ramanathapuram

I like your article and Always visit your blog. Thanks for sharing... Gold Jewellery Shops in Coimbatore

It's very nice to post. I always read your blog.. So lovely!!! Motorola Service Center in Tnagar

It is great to read this. Thanks for sharing...

Thanks for sharing information. I really appreciate it.


I´ve been thinking of starting a blog on this subject myself .....