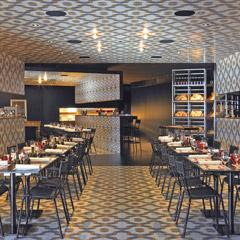 WITH many Italian restaurants, there is so much good food on the menu, it's all so hard to choose.

Do you have the seafood risotto or the spaghetti bolognaise?

A great example of this is Giuseppe Arnaldo and Sons at Crown Casino.

So we went there for lunch one Saturday and when we got there we were welcomed by our friendly waiter and were given the menu. We didn't book because you can't here.

The menu had so much good-sounding food on it, but in the end we ordered Veal, Pork and Mortadella Meatballs with Lemon and Celery salad, and Oregano Dusted Shrimp with Lemon Aioli for the entrees.

For the mains we ordered Mezzi Rigatoni which is rigatoni with pork sausages, sage tomato, garlic and chilli. We also had the Coral Trout Risotto and the Grass-fed Sirloin.

Not long after we'd ordered, the entrees arrived. I first tried the Oregano Shrimp _ little prawns still in their shells which you eat whole. It was good but if I came back I don't think I'd order it again.

Next I tried the meatballs: they were the best meatballs ever. They melted in your mouth and the flavours were all so good.

After a good wait the mains arrived. I tried the risotto first. It was so good. I think risotto is now starting to become my favourite Italian food.

Next I tried the steak. It was cooked perfectly and was very good, probably tied with Rockpool for best steak in Melbourne in my opinion.

The pasta was also very good and you could tell it was homemade. Though it wasn't the best main, it still beat anything you get in a cafe by a long shot.
We were offered dessert by our friendly waiter, but we'd had enough.

Instead, we went to see the movie Julie and Julia. It's a pity that the movie was nowhere near as good as the food we had just experienced.

Oh yum, I've been wanting to try GAS but been put off by the no-bookings policy. But if the steak is as good as Rockpool, well I'm totally there!

I thought everyone loved Julie and Julia!

Your blog keeps getting better and better! Your older articles are not as good as newer ones you have a lot more creativity and originality now keep it up!


The luxury Rolex Watches is an investment in the future;?A legacy that can be passed down from generation to generation.Perhaps the owner received their Luxury Breitling Watches?
through the passage of a family member.?In this case, the Rolex Submariner Watches is valued for sentimental - as well as monetary value.While a Original Omega Watches can be expensive, it is wise to remember that you buy more than just a 1:1 IWC.The unfortunate truth is that whilst it is possible to get discounts on Hermes handbags.