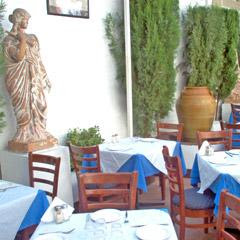 I’ve never been to a restaurant with no menu so I was very interested to see what Jim’s Greek Tavern would be like.

Since it’s very hard not to love Greek food, it wasn’t that worrying to me that there was no menu.

Soon after we arrived at Jim’s Greek Tavern we were given saganaki, grilled octopus and bread with dips.

I tried the bread first and it was some of the best bread I have ever tasted. The fact that it was fresh out of the oven and was still warm made it even better.

Next I tried the octopus. It was very nice and wasn’t too chewy. I didn’t try the saganaki because I’m not a fan of cheese, but Mum and Dad thought it was pretty good.

Next we were given lamb yiros, lamb skewers and snapper with chips. I had the lamb skewers first and they were really good. The lamb was so tender. Next I tried the yiros. It was also very nice and it was in easy-to-eat bit-sized pieces. So soft and tender and some tasty crunchy bits.

I had the snapper next. It was soft and delicious but it had quite a few bones in it.

We ordered some baklava for dessert, but I was so full I couldn’t eat another thing.

One thing's for sure at Jim's: you NEVER go hungry. I'm a vegetarian, and last time I was there -- with a big group of people -- they brought out a huge vegetarian dish just for me to match each of the meat ones. It was quite epic: mushrooms, stuffed peppers, pilaf, breads, dips, dolmades, cheeses, loads of different salads and vegies - plus more I can't remember.

Guy
You have got to see this. Obama playing on XBox. Funniest video ever. http://bit.ly/bllhx1

I fell in love with Greek Food after a 4 week trip around the Greek Islands in 2005. I haven't managed to find any decent Greek Restaurants on the Sunshine Coast where I live but am due to go to Melbourne in a few weeks and will definitely would like to give this place ago.

Thank you for sharing the post.visit us @ Houses For Sale In Tuticorin - FRM Builders


The luxury Rolex Watches is an investment in the future;?A legacy that can be passed down from generation to generation.Perhaps the owner received their Luxury Breitling Watches?
through the passage of a family member.?In this case, the Rolex Submariner Watches is valued for sentimental - as well as monetary value.While a Original Omega Watches can be expensive, it is wise to remember that you buy more than just a 1:1 IWC.The unfortunate truth is that whilst it is possible to get discounts on Hermes handbags.