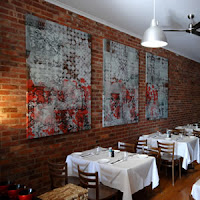 NORTHEAST Victoria is a great place to get good food. I discovered two great places to eat on a recent trip there, the first in the town of Milawa.

Brown Brothers is a winery which has a restaurant as well, the Brown Brothers Epicurean Centre. The restaurant makes it a real food and wine destination. After we sat down, I was served the best apple juice I've ever had. It was from the nearby town of Beechworth. Then the food arrived.

For the entree we had several small dishes, the first being prawns in brik pastry with braised chorizo. The prawns tasted very good and the braised chorizo added to it and made it even better.

Next we had duck salami which had great flavour, followed by venison tartare. This was probably my least favourite of the starters because I'm not a huge fan of raw meat.

I didn't have much of the steak but I wish I had because it was beautifully cooked.

The second place we ate at was Wardens Food & Wine and it's in Ford St, Beechworth (pictured above). In my opinion, this is a one of the best restaurants in Victoria.

To start with I ordered saffron gnocchi, which tasted great. The saffron taste was not overpowering. My dad had king prawns with a spiced pork polpette. He said it was great which is a bit bad considering I didn't get to try any of it.

For the main meal we ordered loin of lamb with a roasted garlic sauce and a grain-fed porterhouse steak with a caramelised onion sauce. The lamb was beautifully cooked and the sauce was magnificent - that garlic was great.

Next I tried the porterhouse steak which again was beautifully cooked and once again the sauce was great. The beef was just better than the lamb in my opinion.

Wardens is a great restaurant and in my opinion could soon be better than other great Victorian restaurants such as The Royal Mail Hotel in Dunkeld.

I agree with your post. North-east Victoria is a perfect place to get good food. From formal restaurants to simple diners. Cheers to that, mate. :)

I love travelling to North East Victoria for the food! I used to, before I got too busy managing a Vietnamese Restaurant in Capalaba area. You just inspired me to go out more, hahahah!

I'm trying to organise a melbourne food bloggers get together if your interested could you send me your email address.

In accordance with all of them you need to now be entirely set up in order to product owner and grow fabulously wealthy. Prepared, set, move!As we know, Lots of runescape merchanting manuals have been written during the last couple of years as well as an identical amount say to posess the techniques to endless living, fame, along with wealth. Pick unusual itemsRare goods like get together a terrific way to, Halloween night hides as well as Santa caps have got attractiveness since they're only available in a only a certain volume.

Nice ...Contact us for Massage Parlours in Chennai.Visit us @ http://greendayspa.in/

Hello Everybody,
My name is Mrs Sharon Sim. I live in Singapore and i am a happy woman today? and i told my self that any lender that rescue my family from our poor situation, i will refer any person that is looking for loan to him, he gave me happiness to me and my family, i was in need of a loan of S$250,000.00 to start my life all over as i am a single mother with 3 kids I met this honest and GOD fearing man loan lender that help me with a loan of S$250,000.00 SG. Dollar, he is a GOD fearing man, if you are in need of loan and you will pay back the loan please contact him tell him that is Mrs Sharon, that refer you to him. contact Dr Purva Pius,via email:(urgentloan22@gmail.com) Thank you.

Nice blog. It inspires me a lot. Thanks for publishing such useful information. For more information visit buy spice online


You buy a commitment from manufacturers to meet their standards by maintaining the high quality running of your Rolex Watches.If you have any repair needs in the future, you can return to the manufacturer or authorized dealer and be assured that your Original Omega Watches will be treated with the same care with which it was made.A Luxury Breitling Watches is more than just a wristwatch; This is a piece of 1:1 IWC that reflects your personality and personal style - and can be enjoyed for a lifetime.If you’re shopping Hermes handbags online or in a store, don’t be rushed into making a purchase.The buying Rolex Submariner Watches season is here and now is the time to buy you or your loved one a good Christmas gift

replica rolex million years in the past few years to transform a series, 2015 is the 75th anniversary of the birth of the replica watches uk Portuguese series, so this year's turn to launch a new series of Portuguese watch, including the calendar date of the date of the watch, manually on the eight-day power reserve replica watches, As well as IWC brand history